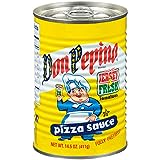 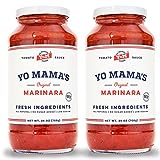 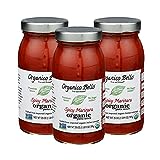 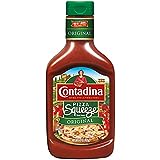 Pizza is considered to be the favorite food of many people around the world. This most famous dish of Italian cuisine consists of a thin round dough with the obligatory tomato sauce. Next to it, you can find different ingredients depending on the taste – cheese (especially mozzarella), meat, vegetables, spices, and even fruit.

What is the difference between pizza sauce and marinara?

The marinara sauce refers to a particular sauce, while a pizza sauce can be any sauce put on top of a pizza. Still, the term primarily refers to a tomato-based sauce that is commonly used on pizzas.

Also, marinara sauce is more versatile than pizza sauce. It can be used with various pasta kinds, dipping sauce, or even a pizza.

The marinara sauce is cooked and reduced to a thick paste depending on traditional recipes, while the pizza sauce is raw.

Traditionally, pizza sauce was ground tomato paste that was sparsely seasoned. The sauce was cooked in the oven as part of the pizza. However, there are many variations today. Some of those even require the sauce to be cooked and reduced.

While both sauces are different, there have been many instances where they have been used interchangeably, more commonly by home cooks than by professionals. Using a marinara sauce on a pizza gives it a slightly more different and complex flavor.

The origin of pizza and pizza sauce

In June 1889, Naples became famous for its tomato-based pizzas. The Neapolitan chef Raffaele Esposito named a pizza after the queen, Margaret of Savoy, to honor her. It was garnished with tomatoes, mozzarella, and basil ingredients that displayed the new Italian flag colors, and the chef called it – Margarita.

The origin of marinara sauce

When it comes to tomato-based sauces, you can find as many recipes and variations as grains of sand on a beach. Recipes for pizza sauce are as varied as the recipes for “marinara”. There are so many versions to it. Spices can make a huge difference, and they vary from culture to culture.

Like many Italian classics, the original marinara sauce comes from Naples, south of Rome, where the people were poor, and opulent pasta dishes were served. However, there was no marinara sauce before the mid-16th century when the Spanish people introduced the tomato to Europe. However, Italians quickly adopted this new ingredient. One of the Italian chefs, Antonio Latini, was the first to publish a tomato sauce recipe in his cookbook. Since then, tomato sauce has evolved in many variations.

The sailors’ wife is the literal translation of marinara. The marinara sauce that resembles the Italian original has more than fewer ingredients such as a little onion and garlic, many canned tomatoes, basil, oregano or thyme, and olive oil main ingredients for an Italian-style marinara sauce. Canned tomatoes, not fresh. Many Italians swear that they taste much better in the sauce than fresh ones.

Fry the garlic and onions for about two minutes until the onions are transparent. Next, add the herbs, tomatoes, and sugar. Bring to a boil lower to a simmer, occasionally stirring for 30 minutes—spice it with salt and pepper.

Heat the oil in a saucepan. Add the onions, spices, crushed garlic cloves, and stir it all well. After you bring it to a boil, let it simmer for 10 minutes. Don’t forget to spice it up with salt and pepper.

Can you replace marinara with pizza sauce (or vice versa)?

If you love preparing Italian food, you can quickly run out of sauce at some point. It can happen while cooking a delicious pasta that you reach into the fridge for some marinara sauce only to discover that you’re out of it. For some people, fixing this is as easy. They’ll swap the sauces. For others, though, replacing marinara with pizza sauce and vice versa is a big no. Why? What’re the differences between marinara and pizza sauce?

­­­The similarities between pizza sauce and marinara

As you can imagine, there are several similarities between marinara sauce and pizza sauce that makes them similar enough for people to believe they can exchange them at will.
They’re both tomato-based for starters, have similar seasonings. They are cooked similarly, but that’s about it.

The differences between pizza sauce and marinara

There are some differences between marinara and pizza sauce. Look at the following list:

Marinara sauce is always used with pasta, and that means it needs to be thicker and chunkier. Marinara is the thickest out of all the varieties of pizza. It is served on top of the pasta.

Pizza sauce is meant to be used as a layer between the pizza crust and the toppings. That is why it can be a little runnier so that it spreads more easily.

So it is fair to say that marinara and pizza sauce would give you completely different results when you try to substitute one for each other.

However, it is possible to do so, but we’ll explain how they do it in Italy before we tell you how you can do that.

You’ll be surprised to find out that there’s no such fuzz about marinara and pizza sauce in Italy. They consider it to be the same.

Traditional tomato sauce is called `sugo.` The ingredients and preparation of this sauce vary from person to person.

Italians prepare large quantities of sugo and add ingredients as needed. If someone asks for a pizza, they use sugo or make it thinner with pasta water. If someone orders spaghetti, they thicken sugo with extra spices to give it its characteristic flavor.

They figure there’s no need to complicate things – after all, simplicity is one of the keys to Italian cooking.​

Can you replace marinara with pizza sauce or vice versa?

No, that’s not quite possible. However, you can always turn one into another. As we have mentioned before, while there are some apparent differences between marinara and pizza sauce, they both have the same bases. That’s why it’s all about matching the consistency and desired taste of the sauce.

From pizza sauce to marinara

If you need marinara and you only have pizza sauce, there is a solution. It would help if you thickened your sauce and add more spices.

Garlic, basil, oregano, onion, celery, and bay leaves are traditional ingredients you can use when making marinara.

Next comes the texture, and there are various ways you can thicken the consistency of pizza sauce.

Cook the pizza sauce at a low boil while stirring. That will help the water evaporate, thickening the sauce. Cook until it has achieved the desired consistency.

You can also thicken the sauce by finishing cooking your spaghetti in it. Just wait for the spaghetti to be almost al dente, then add it to your simmering sauce.

From marinara to pizza sauce

Good news. Turning marinara sauce into pizza sauce is even easier than doing the opposite. Mostly because pizza sauce can be pretty much anything you want it to be.

If you want to reach the consistency, you can add some tomato paste or tomato juice to thicken it slightly.

Can you use spaghetti sauce as pizza sauce?

In short, you can, but only if you make spaghetti sauce thicker, with more garlic and parm cheese.

For some, the tomato-based (red) pizza and pasta sauces are interchangeable. Others notice differences but are not sure what they are. We will help you with that, so take a look at the following:

The closest pasta sauce to a classic pizza sauce is a marinara sauce, as we have explained above. Some pizzerias offer marinara dipping sauces for their crusts or allow customers to have marinara sauce on their pizza.

Which sauce is best for pizza?

Tomato sauce for pizzas is always a hit, although there are many other options to get different and equally tasty recipes.

We recommend the following one:

A trendy alternative, known as white sauce, is pizza sauce made from milk, Parmesan cheese, onion, and garlic. These main ingredients are also accompanied by a little butter, oil, flour, basil, oregano, salt, and pepper. You can also use cream instead of milk. It would not be necessary to add flour, since it is only used to thicken.

The best cheese for pizza

It can be either Mozzarella or noble mold cheese. Nowadays, food, in addition to tasting good, has to be pleasant to the eye. Although a pizza consists of several ingredients, cheese is undoubtedly one of the most important.

When choosing cheese for pizza, the basic rules are to avoid those types that contain a high proportion of fat because they melt during baking, so the result is visible fat on the pizza.

The cheese put on the pizza should be cold because it can toast and even burn by using warm cheese. It would be best if you always grated the cheese into smaller or larger pieces. When it comes to hard cheeses, you can also cut them ​​into thin slices. It is unnecessary to overdo it with cheese, so it is recommended to put about 150 g of cheese on a pizza with a 30 cm diameter.

Mozzarella is considered a classic Italian pizza choice. Several types of mozzarella and all types can be used to prepare pizza, but due to its specific rich taste, buffalo milk mozzarella is the most praised. Fresh mozzarella on the pizza may release too much water resulting in a gooey dough. This problem can be solved by wrapping the mozzarella in a kitchen cloth and hanging it to drain. This procedure is still demanding, so excess water can be removed by cutting the mozzarella into thin slices and wiping with kitchen paper.

Crushed cheese with noble molds like Gorgonzola or Roquefort on pizza can combine well with fresh vegetables like rocket and cherry tomatoes. This kind of cheese gives a unique aroma to the pizza. However, due to the strong taste, it should not be overdone. In addition to being combined with other cheeses, noble mold cheese can also be added to bechamel sauce when making “white” pizzas without tomato sauce.

We hope you found this article useful and learned something new! 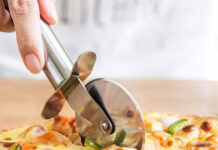 8 Best Pizza Cutter for Your Kitchen 2021 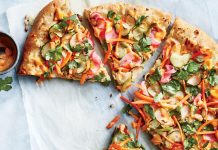 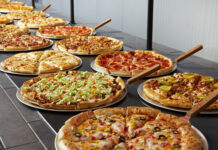